We have spent this week working out how to best get this project going at full speed. We have planned out something for each of us to do in a rather lovely Gantt chart, and ensured that they work logically (no animation can happen before 3D rendering has been done for example).

To ensure that the Max programming isn't held back waiting for UDP, I've suggested we prototype it using parameters which will be connected to the game. In presentation mode, we will have different buttons and sliders connected to sends, so that we can show what happens when an event happens. This is just a fall-back in case UDP hasn't got to the stage I'm hoping it will before Wednesday's meeting.

This weekend has been set aside to try and get a working game going in Unity- it won't necessarily be flashy, but at least the basic interactivity.

So far I've looked into and implemented:
- Boundaries (to stop the whale vanishing offscreen when hands are out of the boundaries).
- Scrolling backgrounds
- Attaching the whale or any object to the cursor, but retaining physics so that the whale has a sense of weight to it.
- Health systems (if hit, lose a heart)
-Ash had the great idea to show a cursor to reflect where the player's hand actually is, so that they can see where the whale is headed. (The whale moving slower than the hand is more realistic feeling, but could be confusing, so having a cursor like this prevents people not knowing what is going on).
- I've looked into how spawning objects work (harpoons and boats would be what we need).
- I still need to look into the best way to implement a "coming up for air" dynamic into the game. It could be that there's a timer, and you start losing health if it exceeds a set time. The timer would then be set to zero if you go to the top of the screen. 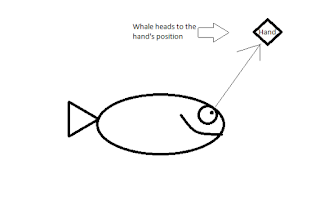 https://unity3d.com/learn/tutorials/projects/space-shooter-tutorial - this tutorial is useful, and has a lot of the principles I need.

Also, Ash and I tried out gamewave, a Leap Motion app which lets you control a computer with the device. From this, we've set up a custom file which only controls the mouse. This makes my life much easier, as I can just use mouse input for the controls instead of working on the leap motion from scratch. It also means that the game can be tested with a mouse.

Extra gestures can also be mapped in this way, so left click could be mapped to making a fist with your hand. An idea I've just had this second is a quick boost to evade things with a quick burst of speed. I'd need to run this past everyone, and make sure it has some kind of factual basis (I'm guessing whales go faster if they need to, but that's all I currently have). It may not go anywhere but the potential is there.
Posted by Bowhead 2 at 02:36