This week's adventures have added a tonne to the game, with my main objectives by and large complete!

The hardest part has been getting the targeting system running, it involved a lot of research, posting on Unity forums, and experimentation to get it right. I learned that there are multiple ways to approach the same task- for instance moving an object rather than addressing its physics, using colliders rather than casting out beams and cross-referencing C# scripts instead of trying to pigeon-hole everything onto the same object.

The death sequence is coming on okay, at the moment it's just got the rope remaining on the whale, and the player loses their control while the failure message is on the screen. It would be great to have it veer offscreen, but  the other ships complicate that a bit. It could be that it depends on which gun hits the whale, and maybe it surfaces instead of ramming all the boats into each other.

It would be nice to also have a reward for winning the game, maybe there's a second whale to show repopulation after the hunting ceases, or even just some pretty lights to just reinforce that there was a victory. The sound should go a huge way towards this though, so it should come out well. 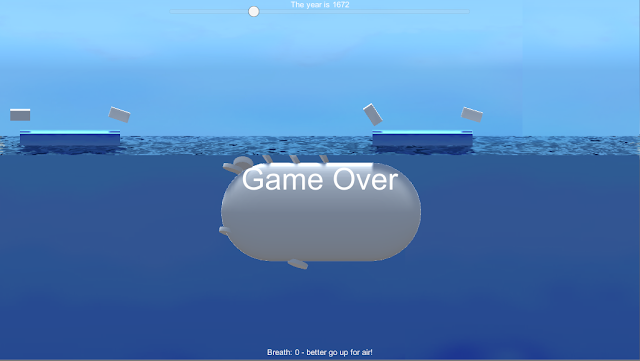 There is a bug/feature where the harpoons seem to be very keen taking a very exaggerated trip up in the air before going to the player's position, but I'll get that hopefully. :)

As it stands, we have a functional and very difficult game! :)
Posted by Bowhead 2 at 01:13