Whale would you look at that!

All in game models have been created and textured down to the talents of Nathan, Daniel and myself! Before Adam came in to do his bit I took the liberty of adding them into unity and making sure the textures were correct which was a bit trickier than imagined. The biggest issue was the sails as not only have I moved each sail so they are ALL facing the wrong direction (which will be fixed tomorrow, rookie error) but they became a 3d object despite starting its life only having 2 sides. Because of this the textures were inside out meaning some more final edits needed to be made before Unity would accept them.

In other developments Adam is a wizard and I'm beyond impressed by his knowledge of game design. 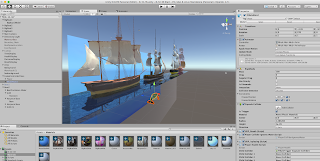 Edit: I wrote this last night at about 10pm, but completely forgot to send it. I've now just turn my laptop on to see this. My bad